A week ago, when i worked at home computer i encountered with strange issue, xorg was stuck, i tried ctrl-alt-backspace and magic keys without result, so i rebooted host.
While computer is booted i saw few errors from different daemons that they can not found some files and finally when i tried to login i got fresh login screen after entered password, again and again. Superuser was disabled, so i booted into singlemod but only one errer that i saw was ‘Unable to cd to ‘/home/ivan’ for user ‘ivan'”. Considering the suddenness of what happened, i thought that my HDD broken, i booted from livecd and checked s.m.a.r.t., hdd surface for bad blocks and did not found anything. After that my paranoia  took over and i started to search rootkits or something that can broke my OS and nothing found again.

I configured network from single mode, start xsession with browser and started searching, suddenly i found article when someone said that run install script and that script changed permissions on ‘/’, i looked at my ‘/’ and observed 0644. For me is still a mystery how it happened.

Some days ago i got additional VDS and wanted to install php5-fpm from dotdeb, but after i added dotdeb repository, apt started to try upgrade mysql and nginx from dotdeb. Solution to stop that:

Next time if i will want to install something from dotdeb, i can use -t switch for apt-get or aptitude.

Few month ago i was interested in how to block incoming traffic from Tor network. Tor network have finitely numbers of exit nodes, so the solution is to block traffic from this nodes. I see two solutions how to block exit nodes.  First use TorDNSEL service, in brief you can check that connection comes from Tor exit node or not by querying special domain name. It is useful if you want to do this check in your php script, for example. But i do not know how to protect  host completely by this method. Another way is to use exitlist. By this way you can get list of addresses. Both ways have advantages and disadvantages. I prefer last solution because, it allow to protect my hosts completely.  Cons of this method – near 700-800 rules into firewall, that can slow down your host.

Anyway, first that i done – simply script that fetch list of IP and print them to standard output. When i started to writing script i wanted to expand features in future. I want to generate ready firewall rules for example, but now this script can only print list of IP’s. I do not want to integrate firewall rules application in this script, because i think this job must be done by another script.
So, now this script only fetch and print IP addresses or exit with error code if can not do it:

This sequence allow  to make decision for most packets before they pass Tor filtration rules.
I organize Tor filtration rules in separate table called TorExitnodes, it allow to update only this table and do not touch other firewall rules. Also i create table TorBlockAndLog that contain LOG and DROP target, but it is optional, you can simply drop packets.

For updating firewall rules for exit nodes i made next bash scrip and place it in cront:

Where is variable “SOLVE” store path to previous perl script, as i say before, if you do not need special action for incoming connections from Tor, you can change “TorBlockAndLog” on “DROP”.

It is good idea to place whitelist before TorExitnodes, who can know, may be one fine day you found -s 0.0.0.0/0 -j DROP into this table. =)

Few months ago i faced with hotmail spam filter, every time when my host tried to send email to any hotmail address i saw next error in log file:

550 SC-001 (SNT0-MC2-F18) Unfortunately, messages from IP.AD.DR.ESS weren’t sent. Please contact your Internet service provider since part of their network is on our block list. You can also refer your provider to http://mail.live.com/mail/troubleshooting.aspx#errors.

I do apologize if I am unable to provide any details about this situation since we do not have the liberty to discuss the nature of the block.

At this point, I would suggest that you review and comply with Windows Live Hotmail’s technical standards. This information can be found at http://postmaster.live.com/Guidelines.aspx

We regret that we are unable to provide any additional information or assistance at this time.

Yeah, brilliant, thanks for help man. I was tired of the situation, so i just configured exim to send all emails for hotmail.com and live.com thru gmail account.

On this host i had debian squeeze and exim4 configured to send emails directly, i made next modifications in config files, first i created domainlist for “sick” domains:

After that i checked routing:

After i came on new work i found that can not send email thru SMTPS, because port 465 closed on router. At this point i already had configured VPN access on my home router, so i think that it is good idea to route SMTPS traffic thru VPN, let’s start.

For this purposes i needed iproute2 and iptables. First i created new route table and add default route:

Where 192.168.107.5 – ip of my router into VPN and tun_vpn – VPN interface.
After that i created rule, that route marked packets thru VPN route table:

There is time to mark SMTPS packets:

Profit!
PS
In my situation i observed strange effect, although that i set src ip, my host trying to send packets with src ip of local ethernet interface, so i just add masquerade rule into iptables.

Another way to fix it, set route to local work network on router, but i too lazy to do it.

Here i found advice how to make wordpress more securely, idea is to protect access to “/wp-admin” by http auth, but “/wp-admin/admin-ajax.php” must stay available for everyone, same is true for some .css files.
I spend some time to research solution, it was a bit complicated:

It is possible to add additional location to serve static content, but i am too lazy to do it.

PS
Also here i found receipts for apache and lighttpd if anybody interesting. END_OF_DOCUMENT_TOKEN_TO_BE_REPLACED

I expected in few articles an advice to disable direct access to php scripts into “/wp-content/uploads” i done small research and observed, than .php placed into “/wp-content” and into subdirs was newer directly accessed thru web.

PS
I made mistake. At least tiny-mce php scripts must be accessible thru web. So i just convert  this rules that touch ‘/wp-include’ for nginx: 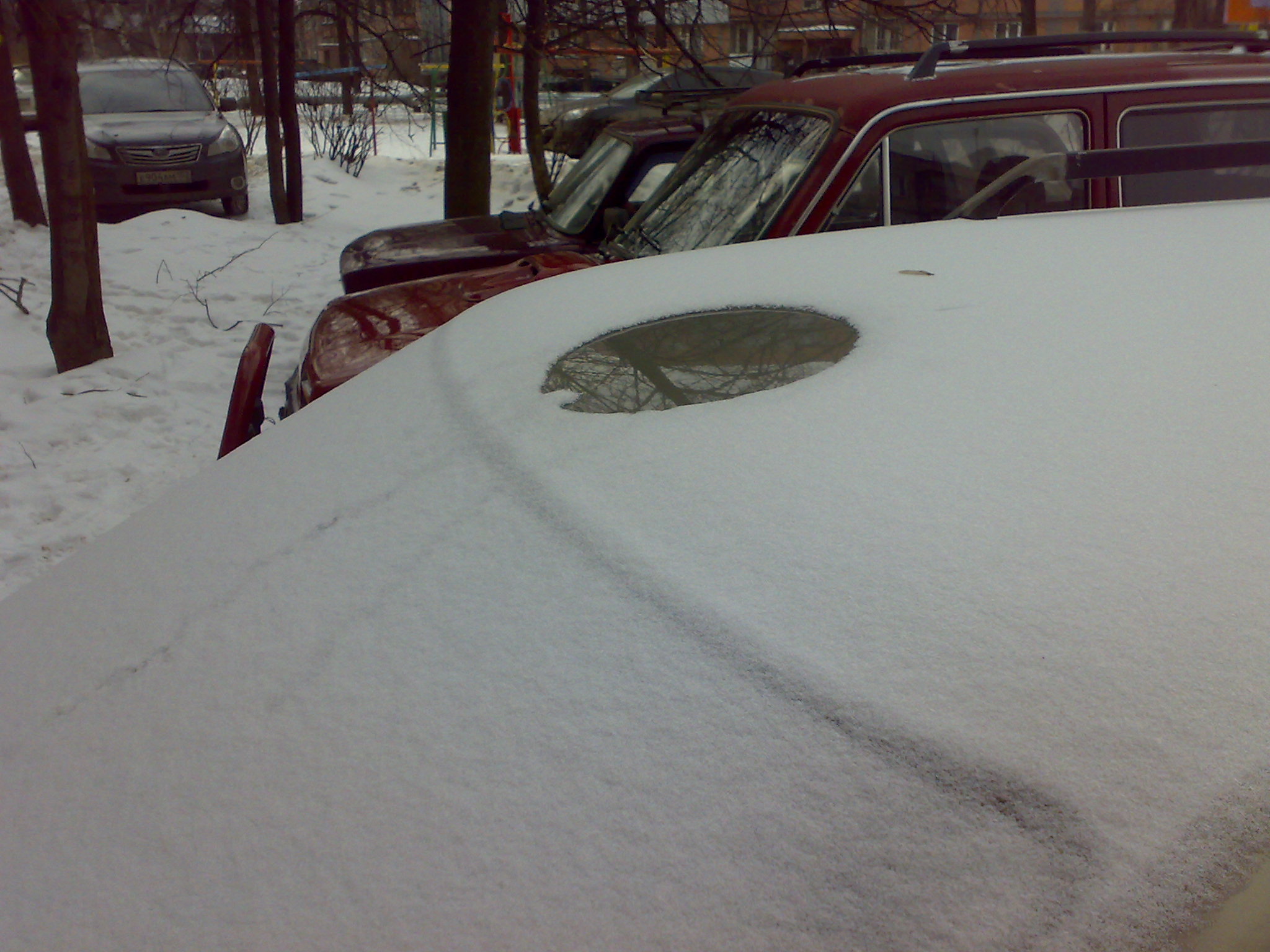 Yesterday before i go to sleep, i looked through the window and found strange circle on roof of my car. Day was very sunny and first i thought that something dark (like a leaf) fell on roof, heated it and melted snow. But edges was very sharp and it looked like accurate circle, next guess was that somebody forget something on my car or it just a prank. With these thoughts i fell asleep. At the morning i want to the car and found frozen water streams on the windshield and grounded battery. After that i remember that last sunday i tuned shock sensor and used lamp attached to roof inside the car. I remember that i swiched it off, but this lamp have strange complicated construction and i was not turned of it completely. The final surprise was that the car could not be opened with a remote control and  all locks on doors was blocked by dust (because i never used it before), but WD-40 saved the situation.

I try to reorder menu items by setting page order into Dashboard/Pages/Quick Edit, also i try plugin called ‘my page orders’, but anyway menu items was sorted alphabetically by page title, so i started to dig deeper.
In my template ‘top menu’ generated by function ‘wp_nav_menu‘ placed into header.php. When i looked at template, i saw that in parameters specified  ‘fallback_cb‘ function defined in function.php. When i found this function, i saw that this function uses ‘get_pages‘ with default arguments to get pages, so i just define 'sort_column' now function looks like get_pages(array( ‘sort_column’ => ‘menu_order’))
After that modification pages in menu sorted by as i expected.