I own XTLW3 3D printer which come with MKS Gen_L  8 bit board and MKS MINI12864 display, out of curiosity I decided to try 32 bit board, one of the cheapest option is MKS Sgen_L  board. Earlier I used marlin firmware on gen_l board, but sgen_l come with smoothieware, so I decided to give it a try.

Looks like the most important advantage of smoothie firmware in comparison with marlin is ability to define your machine settings without re-compiling firmware. You can configure axis resolution, endstops, etc via regular text config file on a sdcard. That approach helps to fix mistakes during configuration or make experiments easily without re-compiling and re-flashing firmware.
Few weeks ago I mounted 3Dtouch sensor (BLtouch’s chinese copy), but I delayed moment of connecting it, anticipating related problems with re-configuring and re-flashing Marlin. Thereby it  was perfect moment to try new firmware.

There MKS provides example config which partially fits my printer, I managed to make it work and here is notes which may be helpful to somebody:

End stops and physical boundaries should be defined, my printer have end stops placed at minimal position for X&Z axis and at maximal position for Y axis. All of them are Normally Opened and connects sense pin to ground when activated, so pull up should be enabled. In XTLW3 hotend nozzle is not above print bed, because end stops misaligned. For me it’s even better, because I made printer dumps small amount of plastic during init procedure paste the table, in that way it doesn’t lie on the bed.
Here is my part of config for end stops and boundaries:

BTW, you should not exceed 132 characters per line. Also smoothieware uses different naming for axes in comparison with Marlin. For Cartesian based printer aplha means X, beta means Y and gamma means Z.
End stop value is just a pin name (mine placed right on the board), ‘^’ suffix enables pull-up and ‘!’ suffix inverts signal.
End stops configuration can be checked by issuing ‘M119’ g-code in printer’s terminal. You need to achieve all endstops to be reported as ‘0’ when they are not triggered and  ‘1’ when they are all triggered, ie:

Here you can see that X and Y end stops was triggered in opposition with  Z which was open.
You need to specify your homing direction in direction where your end stops are placed. I specified to home Y axis to max, because I had end stop at max position in contrast to other axis.
alpha/beta/gamma_min/max – options used to specify physical dimensions of axes. My printer has square rectangular table specified by two points (1,1; 220,220), but head can move besides that coordinates.
When head homed by XY it home outside of table space: 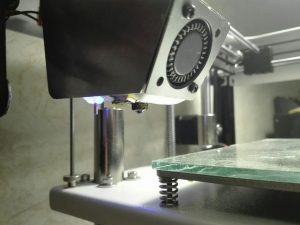 So when I set negative values or values larger than actual table, I just shifted origin, to make it placed on a corner of print table.
Soft limits just set boundaries for G<X> movement codes, they prevents movements which may damage  printer.

I don’t want to make a saga from that post, so I will  continue in the next posts.